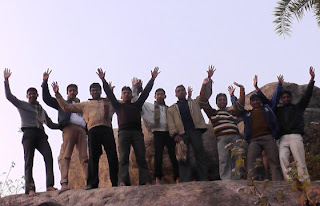 For eight years now, the Jesuit novices of Calcutta and Dumka novitiates come together for a week every year for an inter-novitiate programme, alternatively in Kolkata and in Dumka.  This year it was in Dumka; and on the 5th of January, we, the Calcutta novices along with our socius Fr Sajeev, set out for Dumka.  We journeyed all night from Kolkata and around 5.30 in the morning we reached Dumka.  For most of us it was the first time to experience such a thing called ‘the biting cold’.  Fr Xavier and Fr Stephen, the novice master, were very kind to come to fetch us from the bus stand.  In ten minutes we reached Jisu Jaher, the Dumka Jesuit novitiate.  All the fathers and the 12 Dumka novices welcomed us warmly.  After the morning ablutions (for which the water was too cold) and some refreshments, we accompanied our Dumka friends to a sub-station for the Sunday mass.  We were given a grand welcome by the people in their own traditional way.  We really felt happy and blessed.
On Monday morning, we began our course, titled, ‘Walking towards God as men and women’.  Fr Xavier, Fr Saliba and Mrs Marcette very efficiently enlightened us on various topics.  The first year novices had sessions, sharing and discussion on human sexuality.  The second year novices continued from where they left last year with an intensive course mainly focused on the vow of celibacy.  We had a lot of input sessions, discussions etc.  Mrs Marcette threw some light on the present problems in celibate life, and the challenges and demands it presents. 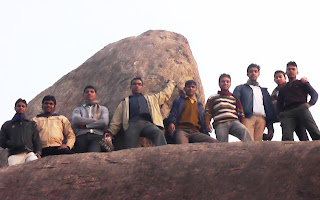 During our stay in Dumka, we also visited a couple of the Jesuit missions in Dumka: St Xavier’s College, Maharo, and a Jesuit run parish cum hostel at Purana Kesari.  It was quite inspiriting for us to witness the dedicated service of the Jesuits for the uplift of the tribals.  One afternoon we went to see the famous ‘hot springs’ in the area and the adjoining hills.  “It is amazing for me to see a mountain for the first time”, remarked Rintu, a first year novice from Kolkata.
On the last day, we had a fitting conclusion to our week ling course by a recollection given by Fr Sajeev.   He emphasised on the virtue of openness in the area of sexuality.  It was an opportunity for us to assimilate and reflect on all that we learnt during the week.  On the 12th evening we bid good bye to everyone and left Dumka with so much to carry home with.
Overall it was a wonderful experience for all of us, to see things differently, and to understand the beauty of human sexuality.  It has helped us to expand our knowledge with regard to our sexuality.  We hope to grow continually in this area of life.  We are grateful to God for having given us this opportunity.
Posted by Unknown at 01:49

Novitiate is the stage of religious formation where a young novice learns the spirituality and way of life of the religious order, discerns a vocation to it and undergo a rigorous training. Dhyan Ashram houses the Novitiate of the Calcutta province of the Society of Jesus. The young novices undergo two years of formation here, which includes various outdoor experiences. This blog contains reflections and reports by the novices at Dhyan Ashram.